In its tenth year, the event served as a hub for sixty stakeholders, representing academia, the tourism industry, international institutions and policy makers, to interact and discuss matters of great interest and importance, concerning prospects for further cooperation between the Black Sea region and China, in the context of the Black Sea - Silk Road corridor.

Opening the Symposium, ICBSS Director General, Mr. Georgios Mitrakos, stressed the multifaceted role of the Black Sea region along the modern Silk Road route. As he noted, in this modern-day Silk Road route, a wide spectrum of economic activities, from trade, infrastructure and the prominent Belt and Road Initiative, to tourism destinations with rich cultural heritage, emerges as an economic driver for sustainable development. 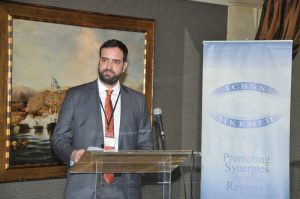 Welcoming the participants, H.E. Mr. Lucian Fătu, Ambassador Extraordinary and Plenipotentiary of Romania to the Hellenic Republic, emphasized the geostrategic importance and the complexities presented in the Black Sea region.

Keynote speech was delivered by Prof. Dr. Zahari Zakhariev, President of the Bulgaria National Association for the Belt and Road and President of the Slavyani Foundation, who highlighted challenges and opportunities arising in the region in relation to the Silk Road corridor, stressing the need to address them directly and efficiently. He continued to state the importance of scientific cooperation and the contribution of international think tank associations, along with the constructive ties created between Black Sea countries and the EU.

Four interconnected sessions served as a means to unfold the discussion on the evolving relations along the Silk Road corridor, focusing on i) tourism marketing, promotion and destination management, ii) the regional dimension and outlook on the new Silk Road strategy, iii) the assessment of foreign direct investments prospects and iv) the Belt and Road Initiative’s business potential for the Black Sea countries.

The Symposium offered the opportunity to Black Sea region stakeholders to present, discuss and promote actions and synergies that will contribute to the establishment of sustainable tourism development and ensure the equitable distribution of the expected benefits, amongst the Black Sea countries.

Nevertheless, tourism is not the sole business sector expected to flourish. As a number of speakers stressed, infrastructure, shipping and the maritime sector are of the most prominent sectors to be attended, in order to increase foreign direct investments in the Black Sea region.

Additionally, speakers accented the significance of the interaction between the Black Sea countries and China in the context of the Belt and Road Initiative; cultural, economic and technological advantages were highlighted.

Among the distinguished participants of the 10th IBSS were the BSEC Secretary General, H.E. Ambassador Michael B. Christides, the Deputy Secretary General of PABSEC, Mr. Miltiadis Makrygiannis, the Director of the Romanian Diplomatic Academy and Chairman of the ICBSS Board, Mr. Dan Petre, Senior Officials from the Embassies of the BSEC Member States, and the Embassy of the People's Republic of China in Athens, Experts from the Hellenic Ministry of Foreign Affairs, the Ministry of Culture and the Ministry of Tourism, as well as policy-makers, academics, journalists, entrepreneurs, civil society representatives and researchers primarily from the countries of the wider Black Sea area and the EU member states.