Saints Cyril and Methodius, the co-patrons of Europe, are symbols of cultural dialogue between Eastern and Western Christianity. They are considered to be the two most influential missionaries, having played a principal role in introducing Christianity and developing culture in Slavic countries.

The CoE Cyril and Methodius Route (2021) spans across a series of paths historically connected to the life and mission of Saints Cyril and Methodius, illustrating the heritage related to their legacy. Bulgaria and Greece are the two BSEC countries participating to this Cultural Route.

This Route presents a set of trails in the footsteps of the two Saints - also known as the Holy Brothers or Apostles to the Slavs- and their followers (the Seven Saints Apostles). It brings together places, heritage sites, cultural institutions and tourist attractions across interconnecting countries of Central, Eastern and Southern Europe. The destinations present rich heritage elements in all its forms, such as monuments of the sacred cult of the Saints, secular manifestations of respect for them, and reflections on their work in the modern world.

- Since 1983, the Rila Monastery, situated in Bulgaria, is inscribed on UNSECO World Heritage List of cultural sites.

- On the premises of the Church of Saints Cyril and Methodius, situated in their birthplace, the Greek city of Thessaloniki, there is the monumental column “Book-Temple”, created by the sculptor Dimitra Stavrinidou. It has the shape of an open book, whose pages form the images of the Saints.

- In 2022, the Cyril and Methodius Route won a special prize in the 2021/2022 Tourism Grand Prix competition at the Holiday World fair trade, as well as the BIG SEE Award Grand Prix for Design in Tourism.

Photograph No 3: ‘’Book-Temple’’ and the Church of Saints Cyril and Methodius, Greece 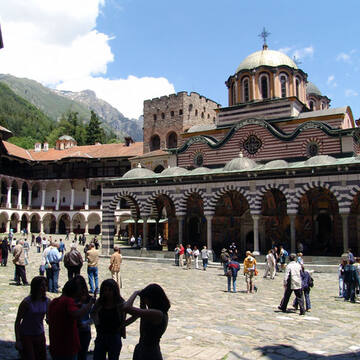 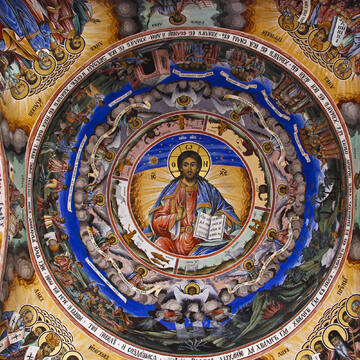 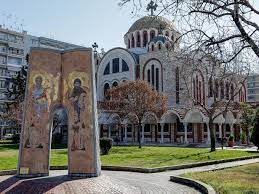