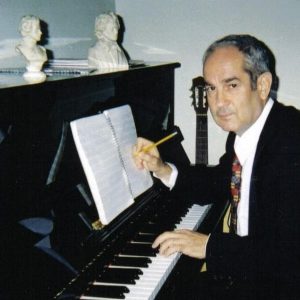 Aleksandër Vezuli (born September 26, 1953, in Tirana, Albania) is an Albanian-American composer. He wrote music in several genres, such as classical music, songs, film and TV, he won the first award in the national contest "Kur Vjen Pranvera" 1988 for his song "Mos u Nxito". Another first award came in 1990 in "Koncertet e Majit" for the song "Bora S’ka Ndërmend të Shkrijë". Other first awards to mention are 5 songs in the national Radio Tirana show "Anketa Muzikore". In 2015, the composer Aleksandër Vezuli wrote and published his own autobiography (588 pages) "Rrëfimet e Një Kompozitori Shqiptar" (Confessions of An Albanian Composer.)

One of his Concert and Chamber works is the Albanian Dance No. 1 for Symphony Orchestra. It includes 2 Flutes, 2 Oboes, 2 Clarinets in Bb, 2 Bassoons, 3 Horns in F, 2 Trumpets in Bb, 3 Trombones, Timpani & Strings.